Faith at a Slow Gallup in U.S. 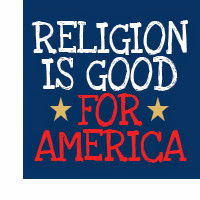 Most Americans didn't need a poll to tell them that religion is having a lesser impact on society. Like anyone else, they can turn on the television or open the newspaper and attack after attack on faith. Years after purging God from schools, the country is finally feelings its effects.

When Gallup asked Americans if religion was losing its influence in America, 77% of people agreed. Only in the year after September 11, when the nation looked to faith for comfort, did a majority think religion was having a greater impact on the country. As Christians, we feel the gap widening with every lawsuit against cheerleaders' Bible signs or every school board rejection of the 10 Commandments. Even the military, once the most openly spiritual institution in America, is marginalizing Christianity.

So much so, it turns out, that Kansas legislators felt compelled to pass a resolution affirming the military's "200+ years of Judeo-Christian tradition." Led by Sen. Mitch Holmes (R), a veteran himself, the state senate denounced the "documented trend of increasing hostility from special interests toward religious expression by service members..." Holmes circulated a list of 20 incidents of religious intolerance in the military just since 2010 and encouraged leaders to denounce them. They did -- overwhelmingly. Louisiana is hoping to follow their lead, as 25 state leaders cosponsored a similar military freedom resolution (which FRC helped draft).

Meanwhile, many of the same people who told Gallup that religion is having less of an impact say they wish it had more. Seventy-five percent of respondents recognize religion's benefits to society and think it would be good if Americans were more religious. Why? Because nothing offers individuals more purpose and meaning in life -- and nothing else will create a more stable and prosperous society than one that values every human being. Not only do those who have a personal faith benefit -- but all of society benefits from those who see the inherent value in their fellow man and therefore have a moral motivation to help the poor and vulnerable. This Christian foundation is what has set America apart as such a great and compassionate nation -- and without religion, it's only a matter of time until we can no longer maintain it.