WASHINGTON, D.C. – Congressman Robert Hurt (R-Virginia) today released his December Video Report.  Text of the address is available below, as well as video.  You may view the video by clicking the image below, or by clicking here. 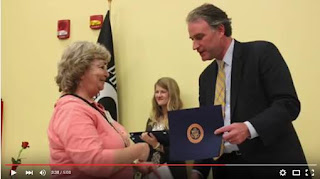 "Hi, I'm Robert Hurt.  Thank you, once again, for tuning into our Monthly Video Report for the month of December.

"I hope that you and your family have enjoyed this season of peace and good will.  I also hope that you were able to take time during this holiday season to reflect upon the true blessings of American peace and prosperity and to reflect upon the heroic efforts of the members of our military, law enforcement, and intelligence communities that allow us to pursue the American dream in peace every day.

"With that in mind, it was with great horror that we as a nation watched that very peace shattered in San Bernardino, California on the second day of December.  Our hearts pour out with sympathy and our prayers seek peace and strength for the victims and the families of this act of terror – this act of unimaginable evil.  Our admiration and thanks go to the fearless law enforcement officers and first responders who rushed to the scene to minister to the victims and who stopped the terrorists dead in their tracks.

"Coming on the heels of the Paris terror attack, the attack in San Bernardino must be a wake-up call to those in Washington who have refused to take the threat of Islamic terrorism and U.S. immigration security seriously.  In the aftermath of Paris, the House of Representatives passed legislation to stop the immigration of Syrian and Iraqi refugees into the United States based upon the fact that our Homeland Security Secretary Jeh Johnson and our FBI Director Jim Comey cannot assure the American people that the Islamic State and other terrorists cannot gain access to our homeland through the refugee program.  The clock is ticking and now is the time for the Senate and the President to take up this legislation and pass it.  The American people deserve nothing less.

"In addition, this month, the House continued its effort to enhance our national security by passing the Visa Waiver Program Improvement Act.  While the Islamic State has been successful in using refugee programs in other parts of the world to carry out its blood-thirsty agenda, there can be no question that they have sought and will continue to seek every means possible to carry out attacks here in the United States – including exploiting the Visa Waiver Program.  Adopted with bipartisan support, this legislation demands that any country participating in our program must meet enhanced U.S. background check standards and immediately suspend a country's ability to participate in the Visa Waiver Program for failure to meet those standards.  I was pleased to see this positive step forward securing our country's borders be signed into law, but there is much more that needs to be done, and I look forward to working with my colleagues continue to strengthen our borders and defeat the threat of Islamic terror here and abroad.

"On the domestic front, I was pleased to see the SHORE Act pass the House of Representatives with bipartisan support as part of a larger effort to promote energy independence in the United States.  Legislation that came to us from constituents concerned about the government's encroachment upon fundamental property rights, the SHORE Act would require that the Federal Energy Regulatory Commission explicitly consider the private property rights of property owners when issuing licenses or enforcement actions on hydro-power projects at Smith Mountain Lake and other similar projects across the United States.  I thank my colleagues in the House for their support, and I hope the Senate will expeditiously consider this legislation and send it to the President's desk for signature.

"Perhaps the greatest honor for me during this month was the opportunity to host five ceremonies across the Fifth District recognizing the unique service of our Vietnam veterans.  Unfortunately, many of our Vietnam veterans were not welcomed home during the Vietnam era in the manner they deserved, and our individual thanks to these patriots is long overdue. And in the end, we know that it is because of their service -- along with the service of all of our veterans -- that we continue to live in the most free and prosperous nation the world has ever known, and we should seek every opportunity to show our gratitude for the sacrifices each has made in the name of freedom.

"As we approach the end of 2015 and the beginning of a new year, allow me to say how much we have appreciated your regular contact over the past year with our offices in Danville, Charlottesville, Farmville, and here in Washington.  Likewise, we are grateful for our opportunities to engage with you during our tele-town halls and our regular local office hours throughout the district.  Perhaps as much as anything, I appreciate the many personal visits that I have had with our constituents during our district work weeks.  I am always overwhelmed by the generosity of the people of the Fifth District as we have visited with you in your neighborhoods, in your workplaces, and your places of worship.  Thank you for your hospitality over the past year, and I wish each and every one a happy and prosperous 2016.

"In closing, please remember that if we may ever be of service to you in any way be sure to contact one of our district offices or our Washington office.  We can always be reached at our website at hurt.house.gov -- where you can also sign up for regular legislative updates.  And don't forget to join the conversation on Facebook, Twitter, and Instagram.

"Once again, thank you for tuning in to our December Monthly Video Report."