"I was pleased to see the Investment Advisers Modernization Act of 2016 pass the House today with bipartisan support in an effort to relieve burdens placed on our Main Street businesses.  At a time when economic uncertainty and federal over-regulation are hindering job creation, it is critical that we look for bipartisan solutions to create jobs in our local communities and get our economy back on track.  As I travel through Virginia's Fifth District, the negative effects of federal over-regulation and government mandates contained in the Dodd-Frank law can be clearly seen among our small businesses.

"One such Dodd-Frank mandate requires private investment funds to register with the SEC, including advisers to private equity funds, despite the fact that such firms pose no systemic risk to the financial system.  This burdensome regulatory requirement has forced firms to dedicate substantial time and resources to compliance, hindering their ability to invest in small businesses across the country.  While this remains bad policy, our efforts to repeal the registration regime have not come to fruition.  This new legislation – H.R. 5424 – represents a new effort to minimize regulatory burdens that are stifling economic investment.

"Small businesses are the backbone of our economy – and the ability for these entities to access private capital is imperative for their success and the success of our local and national economies. In order for our economy to grow and for our small business owners to be able to create the jobs that we need, we must remove unnecessary regulations that tie up private capital and create economic uncertainty and put in place policies that encourage investment, innovation, and the entrepreneurial spirit that makes America the beacon of economic opportunity.

"This bipartisan effort to rid the IAA of outdated, cumbersome regulatory schemes would not curtail the Securities and Exchange Commission's ability to carry out its role, but rather, this measure is a much-needed legislative update to an antiquated law that does not reflect the current model of our nation's small businesses and investors. Through updating and reducing the costly regulations being placed on those who are making critical investments in our economy, our small business owners will have the ability to gain access to capital more easily so that more jobs can be created and more jobs can be preserved."

Jeffrey M. Gallagher, CEO of Virginia Bio, said, "I want to thank Representative Hurt for introducing this important legislation, and continuing to work towards the proper balance of the federal government's regulation of the capital industry. There are hundreds of biotech companies in Virginia in continual need of investment to unlock the promise of their innovations for life-saving products and treatments.  Unnecessary bureaucratic red tape impedes investment, and can block or divert capital from the lab and delay or derail promising research.  Representative Hurt's Investment Adviser Modernization Act of 2016 is an important step that will support economic growth and accelerate research and the development in the Fifth District, across the Commonwealth and the country."

·         In 2013, Congressman Hurt introduced The Small Business Capital Access And Job Preservation Act (HR 1105) which passed the House 254-159. This bill would reduce government mandates and unnecessary regulations on private equity firms implemented by the Dodd-Frank law and thereby promote increased access to capital for small businesses in the Fifth District and across the country. 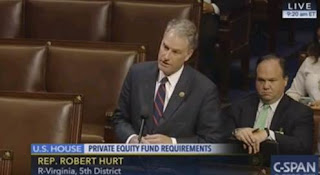