The American Constitution
By Rachel Torres

“No free government or blessings of liberty can be preserved to any people but by a firm adherence to justice…and by frequent reference to fundamental principles.” Patrick Henry[1]

Though the Constitution of the was written for many different reasons, it all came down to a need—a need for a framework to lay down the laws necessary for the Colonies to become a true nation. This Constitution was formed by the fundamental principles to which Patrick Henry was referring. If we do not cultivate a love for our constitution, we are in danger of forgetting what it says and letting these principles become threatened. It is vital that we keep these principles alive in order to protect ourselves as American citizens.

James Madison intended federal powers to be few and defined. This requires accountability. One way our forefathers set up accountability was to create a balance of power by allowing each branch of the government to check the other branches. For instance, take the recent narrow, highly partisan passage of a massive healthcare overhaul. The Judicial branch can still declare this bill unconstitutional. After Obama signed the healthcare bill into law, attorneys general from 13 states sued the federal government. “The Constitution nowhere authorizes the to mandate, either directly or under threat of penalty, that all citizens and legal residents have qualifying healthcare coverage,” the lawsuit states, referring to the new law. [2] Our commonwealth, Virginia, has filed its own lawsuit. “I think the Constitution is being walked on at this moment, and many in the Congress right now don’t care,” Virginia Attorney General Ken Cuccinelli said on C-SPAN.[3] If this new mandate is upheld, then there might be no limit to what the federal government can regulate. It is now up to the Supreme Court to check the Congressional and Executive branches.

The weakness in our Constitution is its inability to make people adhere to justice; no document can give people morals. The Constitution can protect American citizens, but because man is fallible, government will misuse its power. In November 2006, narcotics detectives acting on a drug tip burst into an grandmother’s home. The terrified 92-year old fired a shot at the detectives. They fired back—39 times—killing her. Drugs were never found.[4] Certainly no one begrudges police the right to protect themselves. But too often, government oversteps its bounds.

“We the people” means that the people of the are responsible for electing representatives to run their nation. We have the blessing of liberty, a blessing many throughout history have hoped for and died for. How can we prevent the government from getting out of control? Each American must take the responsibility along with the blessings or our system of government will fail. A Constitution worth having is worth defending. As Calvin Coolidge said, “To live under the American Constitution is the greatest political privilege that was ever accorded to the human race.”

The Marion Simpson Scholarship was established in 2008 in honor of the late Marion E. Simpson.Marion Simpson, a native of Detroit MI, was reared in Pittsburgh, PA and graduated from Muskingum College in New Concord, OH. She taught school at Jackson Elementary School from 1962-75.

After moving to Reston, VA, she served as a tour guide at the U.S. Capitol as a member of Congressman Ralph Regula’s staff from 1980-85 before retiring to Rappahannock, VA with her husband, Allan R. Simpson, Jr., former associate editor of The Repository.

Marion was an active member of F.T. Baptist Church near Sperryville. A former chairman of the Woman’s Missionary Union of the Church, she had also been a volunteer with the Rappahannock literacy program. Marion is fondly remembered as an educator, a beloved friend, and a keeper of Republican ideals.

The $1,000 scholarship is awarded annually by Madison County Republican Women. 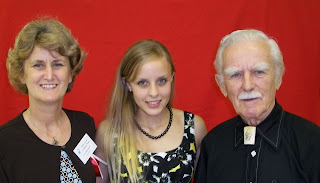