WASHINGTON, D.C. – Congressman Robert Hurt (R-Virginia) released his Monthly Video Address.  Text of the address is available below, as well as video.  You may view the video by clicking the image below, or by clicking here. 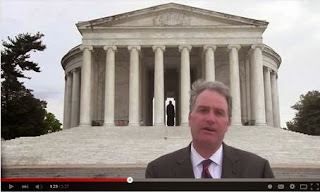 "Hi, I'm Robert Hurt. Thank you for tuning into our Monthly Video Address for the month of April.

"Today, I am at the Jefferson Memorial in Washington. On April 13th, we recognized what would have been the 272nd anniversary of the birth of Thomas Jefferson. Jefferson was not only our third president, but was also the author of our Declaration of Independence and Virginia's Statute for Religious Freedom, and he was the founder of the University of Virginia. Jefferson was an indispensable leader in the founding of this great nation and left his mark on nearly every foundational element of our republic. He promoted religious freedom and public education, believing both were fundamental to the success of our newly minted democracy. I would encourage all of my constituents -- especially our students -- to visit the Jefferson Memorial in the near future. You will not be disappointed.

"As for Fifth District news, during the month of April, I was pleased to travel across the district and meet with nearly 300 local elected officials. It was good to touch base with those who share the responsibility in representing the two cities, 21 counties, and 39 towns that make up Virginia's Fifth District. Thomas Jefferson believed government works best when it is closest to the people, and we are fortunate to be represented by dedicated public servants at the state and local level. It is an honor to work alongside these local leaders to serve the fine people we represent, and I thank them for their service.

"Additionally this month, Fifth District Virginians filed their tax returns and were again reminded just how complex and outdated our current tax code is. Indeed, a perfect example of how Washington is making life unnecessarily difficult and standing in the way of economic growth. On April 15, the House of Representatives passed several bipartisan bills to make the IRS more transparent and accountable. I was proud to support each of these measures and pleased to see them pass the House with wide bipartisan support.

"Also, in April the Obama administration, and the nations of China, France, Germany, Russia, and the United Kingdom, reached a preliminary agreement with Iran relating to its nuclear program. The prospect of Iran attaining the capability to produce a nuclear weapon is one of the most grave threats we face as a nation, and it must be our policy to do everything within our power to prevent this from happening. Given its nuclear ambitions and history, I am skeptical that Iran will act in good faith and adhere to any of the terms of a deal. I will continue to monitor this situation as we approach the June 30 deadline, and I remain committed to working with my colleagues to ensure that Congress is a meaningful participant in any final agreement that is reached.

"Finally, in April, I introduced the Small Company Disclosure Simplification Act, which would streamline regulations for small public companies and thereby remove dis-incentives for companies to access capital in the public markets. Over-regulation of small businesses undoubtedly stands in the way of job creation across Virginia. The costs associated with our current regulatory climate have a negative effect on small companies -- our most dynamic job creators. I look forward to working with my colleagues on the Financial Services Committee to pass this bill so that we may remove unnecessary, bureaucratic red tape and allow small businesses to strengthen our economy.

"As we close, let us remember Thomas Jefferson for his great contributions to the Commonwealth of Virginia and our great nation, and please let us know if we may ever be of assistance to you in planning a visit to our nation's capital.

"If we may ever be of service to you in any other way, I encourage you to contact us at one of our district offices or at our Washington office. We can always be reached at our website at hurt.house.gov -- where you can also sign up for regular legislative updates. And don't forget to join the conversation on our social media pages.

"Once again, thank you for tuning in to our monthly video address."