How to Vote Absentee


You can vote Absentee In-Person at the nearest voting location or you can request an absentee ballot be mailed to you.

Today marks the beginning of Small Business Week. The U.S. Small Business Administration under Administrator Linda McMahon has been committed to expanding opportunity for entrepreneurs and job creators across the country. In addition to other events this week, SBA is hosting a 3-day virtual conference beginning tomorrow.

"Small businesses are at the heart of our Nation," President Trump writes in his Proclamation. "Our country's 30 million small businesses employ nearly 58 million Americans — 48 percent of the labor force. Each year, small businesses create two-out-of-three net new, private-sector jobs in the United States."

The Administration's economic program reflects that fact. In addition to ongoing regulatory rollback across the Federal government, the United States now operates "under a globally competitive tax system for the first time in decades," according to Commerce Secretary Wilbur Ross.

Nick enlisted in the United States Army after High School.

Following the tragic events of September 11th, 2001, Nick served two combat tours as a Green Beret in the Middle East.

Nick and his wife, Tina, and their three children live in Culpeper, VA.


"Grassroots has proven to be the backbone of our campaign," said Freitas. "I am proud to say that small donor donations from the men and women of Virginia have vaulted our campaign into the lead in the Republican primary."

"This campaign office in the heart of Virginia, allows our campaign to better organize and channel our grassroots energy that is working hard to send Tim Kaine and his liberal agenda home from D.C.," said Del. Freitas.

The Nick Freitas for U.S. Senate campaign leads the Republican field in cash on hand, while touting 6 straw poll victories, and a robust list of endorsements from across the Commonwealth and beyond.
Posted by Madison County Republican Women at 8:41 PM

The Daily Signal features an Interview with Del. Nick Freitas

Do you think America is a racist country?

Watch the Ground Breaking Speech on

Last night E.W. Jackson packed the house in Charlottesville, VA where he delivered a inspiring and mind blowing speech on racism in America. Watch the video below to see what thousands of people are all talking about today. 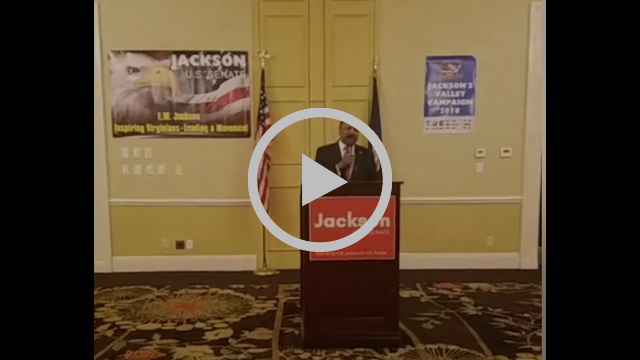 Hey *|FNAME|*, Do you think America is a racist country?

Quote of the Day

"In the past EPA has relied on studies such as the "Harvard six cities" study and others from the American Cancer Society to issue rules such as those governing very fine particles smaller than 2.5 microns, to hammer businesses and localities with costly clean air regulations.  Without access to the data used to regulate them people were helpless to defend themselves.  They just had to "trust the government."   Now EPA is moving to a more open practice of "trust, but verify."

"Making data available for other researchers to evaluate and test is essential to the scientific method.

"Congratulations to Scott Pruitt for making sound, open science essential to the operations of EPA."

!  Transparency terrifies the left-wing ideologues and profiteers who have politicized EPA for far too long. Reform is long overdue and must continue.  Thank you.
Posted by Madison County Republican Women at 12:30 PM

The compelling story of the REAL collusion -- AGAINST Donald Trump!!

This information is a little dated, as Mark Levin first reported it on his radio show on 4/2, where he interviewed the author of the article below.  However, it's such a compelling story that I still wanted to bring it to your attention, even now.

I'll leave it to you to decide what, if any, facts in the article have been verified or discussed by other media sources in the intervening weeks.

I will forewarn you that the article below is lengthy, but as you will see, its size is almost mandatory to unravel the rat's-nest of collusion within our own federal government "leadership", which sought to thwart Donald Trump's election; and later attempted (and is still attempting!!) to prevent him from successfully implementing much of the agenda he campaigned for!!

I urge you to take the time to read it.  Sadly, our government is now operating much more like Russia's than anyone would like to admit!!

E.W. Jackson: Join us for a ground breaking address

Join Us this Sunday, April 29th

Major Speech On Race
by

Fifty years after the death of Rev. Dr. Martin Luther King Jr., Virginia US Senate Candidate, E.W. Jackson, delivers a ground breaking address on "An American Historical Perspective On Race & A Vision For The Future."

Should the Confederate Monuments be torn down? Should the Founding Fathers be denounced as slave owners? Should there be reparations for descendants of slaves? What is the way forward?

Join us Sunday as we come together to address these controversial issues, to inspire Virginia, and to start a Movement!

FREE AND OPEN TO THE PUBLIC. Join our Facebook Event and get your FREE Ticket now!

 Join us for a ground breaking address Virginia US Senate Candidate, E.W. Jackson

CULPEPER, VA – In a historic moment, a majority of the Young Republicans Federation of Virginia (YRFV) members have signed a letter of endorsement for a fellow Young Republican and GOP primary candidate for United States Senate, Nick Freitas.

Individual board members signed a letter stating, "Nick Freitas is the most capable candidate in the 2018 Republican Primary to carry the mantle of young republicans in the general election and remains dedicated to representing the best interests of all Virginian's once a member of the United States Senate."

Chair of the YRFV, Kishore Thota, released the following statement:

"I am proud to endorse Nick Freitas to be the Republican nominee for the U.S. Senate.

Nick has the innate ability to sit down with people and understand where they are coming from. While he may not agree 100 percent with everyone he meets, he is never disagreeable or disrespectful to them. That quality of mutual respect is severely lacking in politics today.

What I admire most about Nick are his personal core values of honesty, loyalty, and respect. His values are not simply statements of principle or aspirations for what he wishes to achieve, they are bonds that connect him to all Virginians. Nick is a candidate we can all be proud to support!"